How to Stay Focused While Working From Home

We Have Answers Podcast Episode 1: Physiotherapy 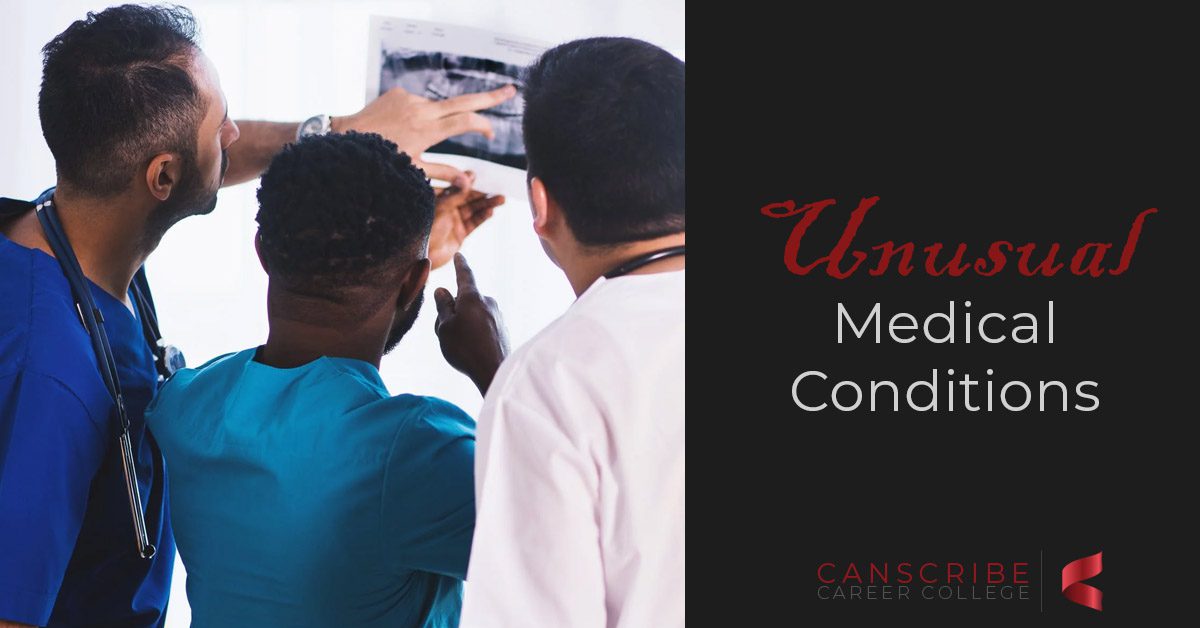 We all know there are strange ailments out there, but what follows is a collection of documented unusual medical conditions.

Patients with this syndrome present with what they describe as hearing very loud explosions that occur within an hour or two of falling asleep.  They don’t complain of having any pain associated with these occurrences.  It is thought that fatigue and stress play a role, but the exact cause has not been determined and will often resolve without treatment.

Pica is when a person feels compelled to eat inedible substances.  This can range from dirt, glue, hair, lint, and paper to things like sharp objects and glass.  It is thought to be caused by a mineral deficiency and the most-frequent patients include children in lower-income areas and pregnant women.

A mental condition where the sufferer believes that a person very close to them – a family member or spouse, has been replaced by an identical imposter.  The patient can continue to have a peaceful relationship with this ‘imposter’ but does not trust them.  Occasionally the ‘imposter’ can be violently attacked.  Some people with this condition even start to question their own reflection.  It is usually caused by a brain injury or a mental illness such as dementia or schizophrenia.

People with this disorder have a hand that behaves independently of the person’s intentions.  Extreme cases reportedly have the ‘alien’ hand wrestling the other hand or attempting to strangle the person while asleep.  The cause is brain trauma such as stroke, aneurysm, or injury.  There is no known cure.

This is a neurological disorder that causes a distorted view of size.  Objects are perceived as being either much larger or much smaller than they really are.  The disorder is temporary and has been linked to migraines, brain tumors, or hallucinogenic drug use.

For a fun-sounding name, this is definitely an unusual medical condition.

Also known as the Cotard Delusion, people with this syndrome believe they are dead and decaying with loss of internal organs or body parts.  Some victims even believe they don’t actually exist.  Typical causes for this syndrome are mental illness or brain injury.

This is a neurological disorder that affects the larynx.  It causes involuntary movement of the larynx causing muscle spasms that impair speech. Oddly, if the person is singing, laughing, whispering, or talking in a high-pitched voice there is no spasm.  There is no known cure, but short-term relief is attained by injections of Botox.

If you think you have suffered from any of the above ailments since reading about them, then you may actually be suffering from Medical Students’ Syndrome.  A hypochondria-like condition, up to 80% of medical students suffer from this syndrome at some point.  It causes them to believe that they have the diseases they are studying.

Can’t get enough of these unusual medical conditions? Are you interested in the medical field but don’t know where to start? Medical Transcription allows you to join the medical industry in as little as 9 months.