Some People Deserve a Special Kind of Support

Learn about the different scholarships below and apply if you feel you qualify. Remember: It never hurts to try.

*Students can only take advantage of one scholarship or bursary at a time.*

CanScribe Career College is offering two annual $1,500 scholarships to any military spouse. To be considered for this scholarship, please submit a 1–2-page essay describing your personal motivation for applying, including background information, how this career choice will impact your life, your plan of action to complete the course and future aspirations.

Get More Info Submit Your Essay

CanScribe offers $1,000 scholarships to students who would like to study at our Kelowna campus.

We do have limited seating, so please contact us for more information.

This Scholarship is Currently Unavailable

Criteria: Preference will be given to individuals who have overcome hardships in their lives and who have given back to their community through volunteering, such as:

Find out about Robert Thompson here. 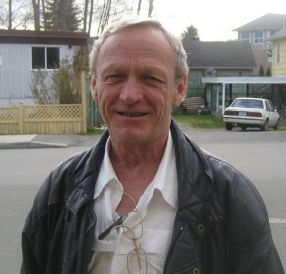 Robert was born in Midland, Ontario on January 11, 1953 and passed away in Nanaimo on November 20, 2009. Robert was the youngest of three. I was the oldest, Doug was the middle child. Our mother and father were divorced when we were very young. Our mother remarried a man who had three sons and then another girl and another boy was born. So there was eight of us altogether. Robert moved to Toronto, Ontario after high school and worked in various jobs there. He then moved to Edmonton, Alberta in 1976 and on to British Columbia in 1977. He lived in Vancouver, Victoria, and finally resided in Nanaimo.

Robert had a great sense of determination and optimism. The more he could learn, the happier he was. He continued his education in B.C. at Simon Fraser University. He also took courses in the culinary field and worked as a chef for many years. Robert also studied law and worked as a paralegal. He studied religions and languages (he could speak many languages) and took many computer courses. Robert took a Medical Terminology Course and Emergency First Aid which included CPR.

Unfortunately, Robert’s health was never great. He was born a “Blue Baby” and not expected to live. He lived with the HIV virus and with cancer. This was a big factor in his determination to be able to work at home and was why he was taking the Medical Transcription course.

Robert was involved with various charitable organizations for many, many years. He cooked numerous meals at food kitchens for the homeless, especially at Christmas and other holidays. Robert spent time at various senior centers, volunteering, and visiting the residents there. He was an active volunteer at the Nanaimo Parole Citizen Advisory Committee and one of the outstanding jobs he completed for them was their Committee By-laws.

“I am very proud of the things that my brother achieved in his lifetime. I have received so many letters, calls and cards since his passing, all of them telling me how much he was liked and how much he will be missed. Robert spent most of his time helping others. I’m attaching a couple of pictures, one when he was very young. If there is any other information you need, please let me know. Thank you again for setting up this scholarship. It means so much to me that his name will carry on. And I know he would be extremely pleased that his name was helping others. That was his number one goal in his life – to help others.”

To be considered for this scholarship, please submit a 1–2-page essay describing your personal motivation for applying, including background information, how this career choice will impact your life, your plan of action to complete the course, as well as your future aspirations.

Further details can be found here.

These two $500 scholarships are in honour of two CanScribe instructors who have passed in recent years. Both women were regarded as professionals in the Medical Transcription industry and loved by students, graduates, and co-workers alike. The chosen awardees must highlight how working from home, as a Medical Transcriptionist, will help to change their life, their family’s lives, or how it will help their future.

Find out about Pat Bowen and Glenda Ripley here.

Pat Bowen worked as an educational assistant with CanScribe for approximately 6 years, before her untimely passing in January 2019.  Prior to working at CanScribe, Pat worked in the MT industry for over 40 years and held a number of different titles and positions.  Some of the positions she held included medical transcriptionist, QA editor, instructor, trainer, and business owner.  Pat was very involved in AHDI and held a number of leadership positions at the local, state, and national levels, including Director of Training, President AAMT, President of San Diego chapter of AAMT, and President of a Florida chapter of AHDI.  She won the AAMT Educator of the Year award in 1994 and AAMT Member of the Year award in 1996.

Pat was very well liked and respected by students and co-workers.  Members of the instructional team often went to Pat for assistance or suggestions.  She loved working in the MT/HDS industry, and would go out of her way to help anyone coming into the industry.

Glenda began working as an instructor at CanScribe in February 2014.  Prior to working at CanScribe, she had over 25 years’ experience as a medical transcriptionist, QA editor, and business owner. One of her biggest joys was mentoring students and watching as they improved and progressed.  This passion led her to become an addiction recovery coach.  She had also worked as an instructor at Austin Community College in Austin, Texas.

Glenda was a very patient and understanding woman who was always willing to lend a hand to help her fellow co-workers. She was a very happy person with a positive outlook on life. She was loved and respected by students and co-workers alike.

CanScribe offers military members or military family members interested in applying for the Medical Transcription / Healthcare Documentation Program in both Canada and the United States a 10% discount off. CanScribe understands the sacrifices that military families make for our countries. The sacrifice is made by both the member in the military, and the spouse and children.

This scholarship is designed to help these families find a career that moves with them. Most noteworthy, from base to base, from city to city, Medical Transcriptionists can take their career with them.

CanScribe is proud to offer a scholarship of 10% off tuition into the Medical Transcription / Healthcare Documentation Specialist Program to spouses of law enforcement officers. This includes the spouses of both the RCMP and city police.

Police Officers are often moved from city to city, which can make it difficult for the spouse to keep a long lasting career. CanScribe wants to help you and your family have a life-long career even when you move!

CanScribe offers past students from the Medical Transcription / Healthcare Documentation Specialist and Administrative Assistant / Virtual Assistant Programs a 20% discount on tuition. Anyone who has graduated or completed one of these two programs can take advantage of this scholarship.

Loans Canada has partnered with CanScribe to offer a $750 scholarship for the MT/HDS and AA/VA programs! This award is given three times per year to applicants who are able to show financial literacy.

Is Online Training for a Healthcare or Business Career Right for You?
Get More Information…

If you’re interested in learning more about CanScribe’s training programs and a career in Healthcare, and exploring whether online distance education is right for you, fill out the form on this page to receive more information.

A helpful CanScribe Career College Admissions Representative will be happy to answer any questions and can help with everything from career paths to financial aid.