Everything You Need to Know About the Book of Style 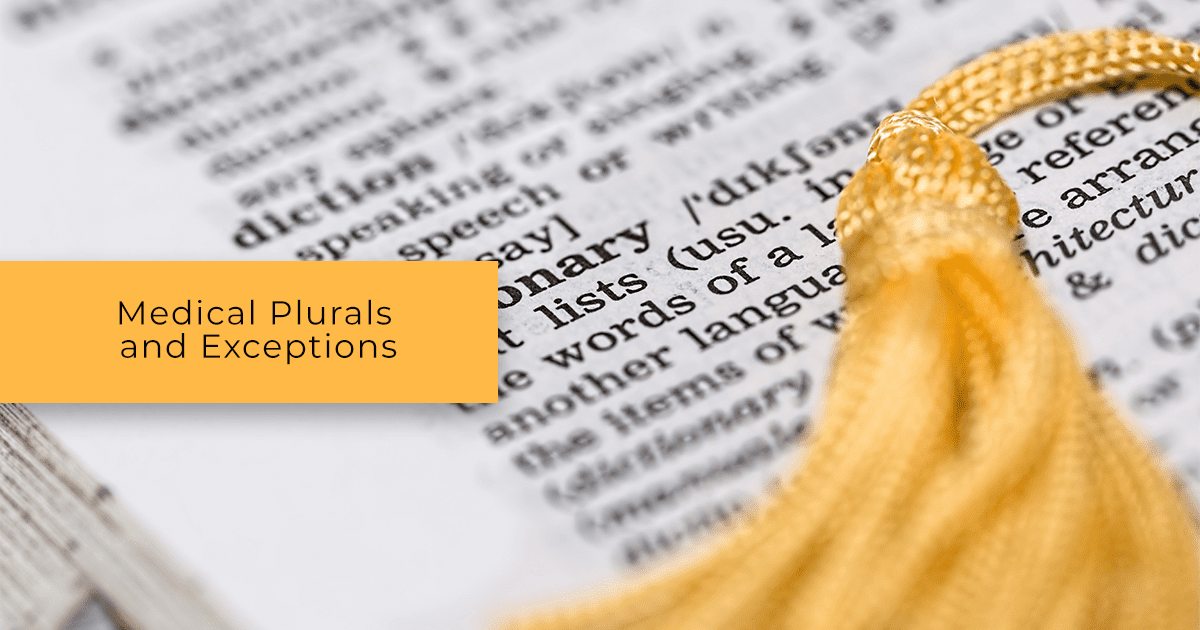 Wouldn’t it be just fantastic if all we had to do with a word to make it plural would be to add a simple “s” at the end?

Unfortunately, it isn’t that simple. There are a lot of grammar rules in the English language, and medical words complicate things even more! Fortunately, there are many resources to help Medical Transcriptionist/Healthcare Documentation Specialists, including the Book of Style. Below is a summary of the common rules of medical plurals and exceptions that you will come across in your MT/HDS career.

The Rules of Medical Plurals for Medical Transcriptionists

To make a noun plural in most cases you just add “s” such as patients or ideas. For words ending in s, x, ch, sh, or z, in most cases add “es” to make it plural. Examples are lunches or taxes. If a word ends in “y” and is preceded by a vowel, add “s” and if it is preceded by a consonant, change the “y” to “i” and add es. Some examples of this would be:

When a word ends in “o”, add s to make it plural if it is preceded by a vowel, such as ratio with the plural being ratios. However, when the “o” is preceded by a consonant you may have to add an “s” or “es.” Make sure to check a dictionary for spelling. This includes words such as:

If a noun ends in f, ef or ff you may simply add “s” or change the f or ef to “ve” and add s. This rule applies to nouns such as:

Some words form irregular words when pluralized and you may need to consult a dictionary. For example, we don’t use the word “womans” as a plural, we say “women” and child becomes “children.” Some words are the same, whether they are singular or plural such as biceps, triceps, series, or scissors.

When it comes to compound nouns, we pluralize single-word compounds as if the final word element stood alone. Therefore, the plural of backpack is backpacks (not backspack) and birthday is birthdays (not birthsday). For words that have a space between them or a hyphen, we pluralize the main noun. This includes words such as passerby, which becomes passersby or father-in-law with the plural being fathers-in-law. If the compound word does not have a noun, we pluralize the final word element. So hang-up would be hang-ups and know-it-all becomes know-it-alls. For words that end in “ful” make plural simply by adding “s.” We don’t change the “ful” to fulls. So the plural of teaspoon is teaspoonfuls.

For proper nouns we add “s” to make it plural unless it ends in s, x, ch, sh, or z in which case you would add es. Thus the name Smith becomes Smiths and Jones will be Joneses. We should keep the original spelling of proper nouns but add s or es depending on word ending. A couple of examples are Christmases and Rolexes.

Some of the exceptions for medical plurals you may run into in medical transcription/healthcare documentation are listed below. Remember, many of the medical words we use are derived from Latin or Greek and thus the rules for English pluralization would not apply. Again, we encourage you to save and share!

For Latin terms, the adjective and noun must agree in gender, number, and case. There are many variations, and a medical dictionary is your best friend in deciphering these plurals. Some examples of singular to plural Latin medical words you might see are:

There are some Latin medical terms that are often misread as being plural when actually they are used in Latin to show the possessive case. Some of these are:

That was our medical plurals and exceptions reference guide! As a Medical Transcriptionist, it is always useful to have a dictionary nearby if need be. If you’re interested in learning more about English medical plurals, check out this article on the Merriam-Webster site.  If you have any favorite rules or guidelines, please share them with us! Keep your eyes on our blog page for more great tips from our MT/HDS instructors, and don’t forget to follow CanScribe on Facebook, LinkedIn, or Instagram for more tips on medical plurals and more!